A computer render of the WikiVault system at night

WikiVault is my proposal in response to Brief 02_Template, the second brief for the final year of the MArch postgraduate architecture course at the University of Westminster. The brief asked students to research and then develop a system for an open-source construction set specifically looking at the WikiHouse project by 00:/ Full details of the brief can be found at: http://wewanttolearn.wordpress.com/category/brief/
Having researched reciprocal structures at the beginning of the year my system utilises a reciprocal frame structure created from flat sheet material that can be assembled rapidly on site with only the aid of a jig or crane for lifting. The system is a very efficient use of material particularly owing to the fact that no formwork is necessary in the assembly of the vaulting structure. In addition, the use of a flat sheet material means that it can be easily and accurately pre-fabricated offsite using either CNC machines or laser cutters depending on the scale required. This has the added benefit of easy transportation to the site.

The structural logic for the system evolved from the mandala reciprocal roof structure and Joseph Abeille’s vault, a solid ashlar floor construction from the seventeenth century.

The value of an open source construction set is that it is easy to use and adapt by anyone. With this in mind I developed a software plug-in for Grasshopper and Rhino that simplifies the system into easily changeable parameters. A series of sliders and any input surface determine the final form of the vault system. I hope to make this plug in available for Grasshopper users as an open-source software once further testing and bug fixes have been resolved.

As part of the continuing development of the WikiVault system I have started to develop a component based library including floors, stairs and modular wall elements to increase the versatility of the system. One obvious flaw is the shelter from the weather of the interior space. In order to address this I have also begun to develop two composite systems utilising a tensile membrane in the first instance and heavy earth construction in the second.
Full details of the initial research and subsequent development of my proposal can be found in the two research documents at the bottom of the page however the gallery below shows some of the key features and images of the system.

Potential future development of the system combined with a tensile membrane

Combining the system with earth construction – assembly diagram 1 of 2

Combining the system with earth construction – assembly diagram 2 of 2

A computer render of the WikiVault system during the day

The video below shows a timelapse of the physical model assembly without the aid of formwork showing how the vault self-supports as it grows in size. 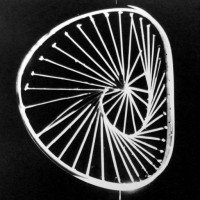 University of Greenwich Unit 15...the ups and downs...